When you book with an account, you will be able to track your payment status, track the confirmation and you can also rate the tour after you finished the tour.
Sign Up
4916
11 Days
Tel Aviv
Tel Aviv
Max People : 25
ItineraryTour IncludesMapPhotosHotelsBrochure

Christian based – 11 day – Deluxe Holy land Tour. A true Christian tour of Israel, with an option to join an excursion to Petra. Guaranteed to operate weekly. 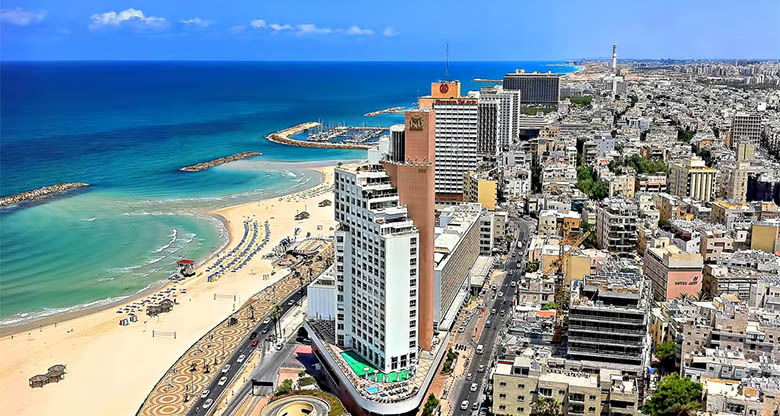 We will be greeted by a Trips Israel representative after passport control. After fetching our luggage, we will be escorted outside the terminal to meet our driver. Check-in to our hotel and the remainder of the day at leisure. Enjoy dinner at our hotel.

Following our first buffet breakfast, we will meet our guide and our group. Drive north along the Mediterranean coast and see the following:

Built by Herod the Great and dedicated to Caesar Augustus 2,000 years ago and once the capital of Judea. Here, Paul embarked on his journey to Tarsus (Acts 9:30) and where Cornelius and his family (the first Gentile believers) lived. Here, Pontius Pilate had his base. See the Roman amphitheater and walk through the excavated fortress, view the water aqueduct, once used for conveying water to the city.

Ascend Mt. Carmel for a panoramic view of Haifa Bay and the Botanical Gardens below. Here Elijah fought the 400 false prophets of Baal.

A crusader port located on a promontory at the northern end of Haifa Bay. See the natural harbor, port, underground passages, secret rooms, as well as the prison.

Drive through the Pastoral Hills of the Galilee and to our kibbutz hotel for check-in. Enjoy a relaxing dinner and explore the kibbutz and its ambiance. 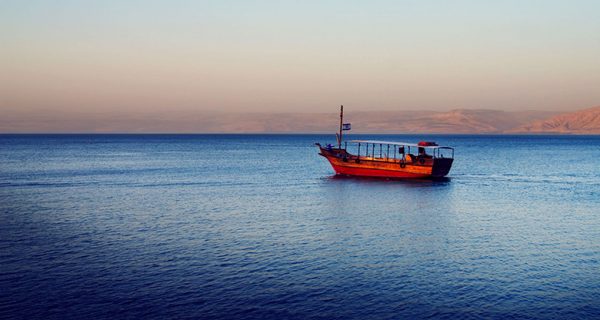 After breakfast, we will start our day with a short tour of Tiberias. We will visit the following places:

Board the Jesus boat cruise to experience life as fishermen to Capernaum.

One of the sources of the River Jordan and where Peter made his confession of faith in Christ (Matt. 16:16) at Caesaria Philippi.

Breakfast at our hotel. We leave the upper Galilee area and drive south. On our way, we will visit the following places:

A Baptismal site in the Jordan River. A chance of being Baptized (request in advance).

The rift of the Jordan valley runs from the Sea of Galilee via the Jordan River and flows to the Dead Sea. This Rift Valley is 120 km (75 mi) long and 15 km (9.3 mi) wide. In the biblical times, it is mentioned that one day the dessert will bloom with flowers and vegetation of every description (Isaiah 35:1-2).

Arrive to Jerusalem and check in to our hotel. Enjoy another relaxing dinner at our hotel. Suggested stroll around the city center of Jerusalem. 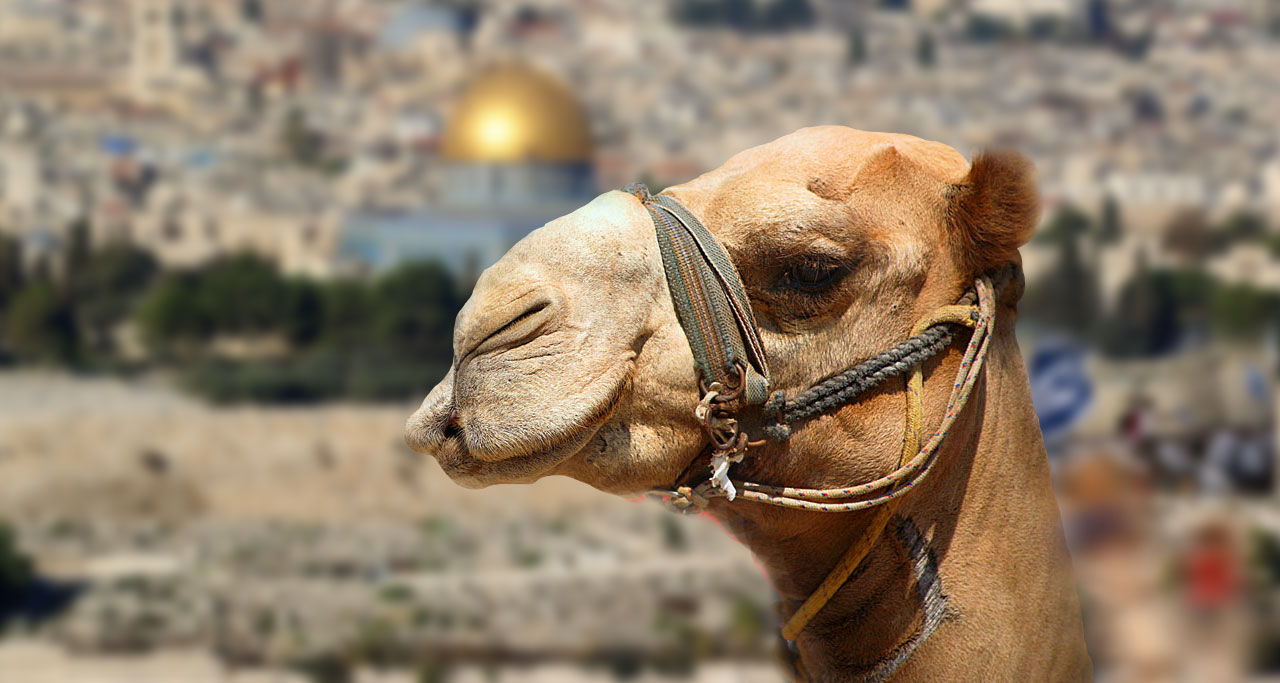 Enjoy breakfast at our hotel. Today, we will visit the following places in and around Jerusalem:

Ascend to the top of Mt. Of Olives for a panoramic view of the Old City of Jerusalem and the Golden Gates. Drive or walk down the mount and visit the Garden of Gethemane.  Here, Jesus prayed on many occasions and where he was arrested. Visit the Church of All Nations, located in the same premises.

The restored Jewish Quarter, includes the site of the Cardo (meaning; “The Heart”), the unearthed main Roman thoroughfare and ancient marketplace lined with columns.

Also known as The Wailing Wall or The Kotel (in Hebrew), which is the last remaining Temple wall. The wall is a relatively a small segment of a far larger retaining wall. The wall was originally erected as part of the expansion of the Second Jewish Temple, built by Herod the Great. This was build on top of a steep hill known to Jews and Christians as the Temple Mount.

Also known as The Stations of the Cross, is where Jesus walked the path carrying a large wooden cross prior to His crucifixion.

Colorful bazaars, alleyways and marketplaces (a chance to test our negotiating skills).

Believed by many Christian, this is the site of Golgotha, where Jesus was crucified and then resurrected.

It is also believed by many Christians, this was the site of Golgotha, where Jesus was crucified and resurrected. 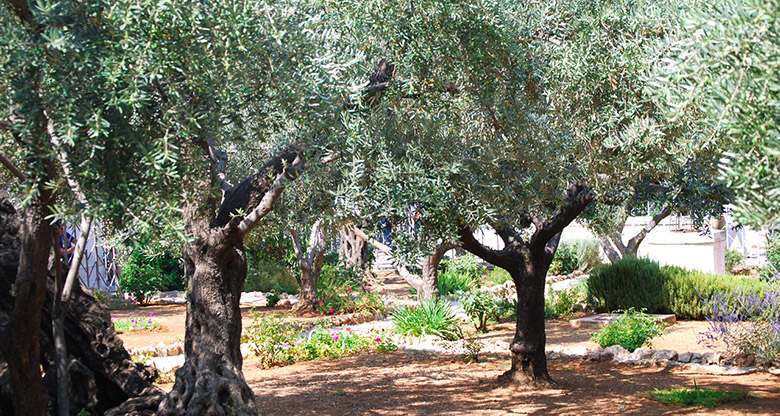 Enjoy breakfast at our hotel. Today, we visit the following:

Memorial for the six million Jews who perished in the Holocaust.

Where the Dead Sea scrolls are housed, as well as the scale model of the old city at the temple period.

Return to our hotel for Shabbat dinner. 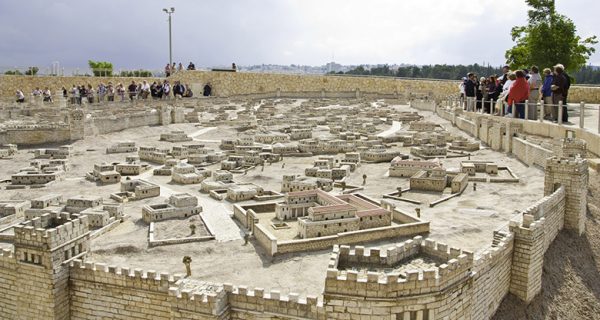 Early breakfast at out hotel. The drive southeast takes us to the Dead Sea area to the lowest point on earth, 1305 feet (398m) below sea level. Visits will include:

Where the Dead Sea Scrolls were discovered by a young shepherd boy in the caves of Qumran. 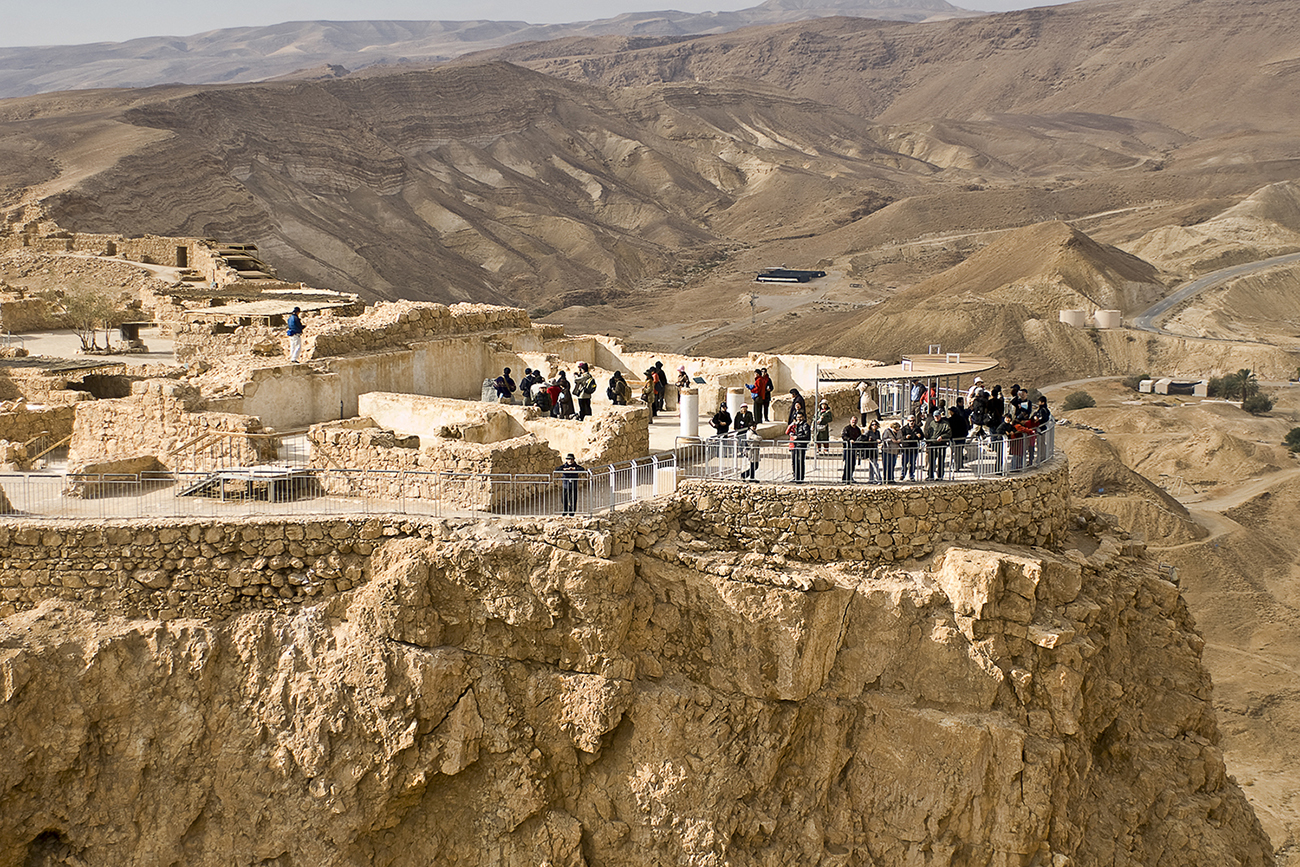 Ascend by cable car to the mountaintop plateau of Masada. Here, the last stronghold of the Jewish Zealots struggled against the Romans. The Zealots held out for three years against the legions of Flavius Silva.

At a beach facility, enjoy a float on the Dead Sea and cover our body in mud. The Dead Sea is uniquely formulated in a small body of water and includes 11-13% salt and other natural healthy ingredients.

Return back to Jerusalem and to our hotel for dinner.

After breakfast, we will journey south towards Eilat, via the Negev Desert and visit:

An Israeli Air Force Base located in the Negev Desert on the west outskirts of Beer-Sheba. View the planes and equipment from past Israel wars.

Enjoy a camel safari in the Desert followed by a biblical light lunch and Bedouin hospitality.

Ben Gurion’s hut (1st Prime Minister of Israel) and where he was buried, while viewing the magnificent Zin valley.

A geological feature of Israel’s Negev desert. The crater is located 85 km south of the city of Beersheba. The shape of the crater is not from a meteor or a volcanic crater formed by a volcanic eruption. Today the crater and surrounding area forms Israel’s largest national park, the Ramon Nature Reserve.

Arrive to Eilat and to our hotel for check in.

Enjoy a relaxing dinner by the Red Sea.

Overnight in the Eilat. 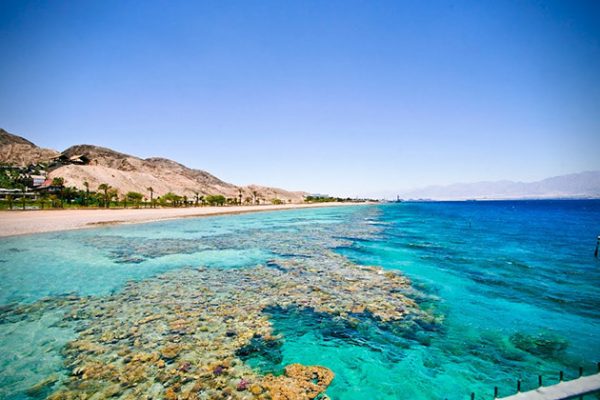 Enjoy a day at leisure. Optional tours and recreations are available from Eilat, such as;

Built by the Nabateans (an early Arab tribe), who settled in the South of Jordan more than 2000 years ago. Petra is famous for its huge monuments, such as; the Treasury, Royal Tombs, Courthouse, Roman Theater and the Qassier Rl-Bint. The city itself is almost 45 Square Km and is considered to be the second wonder of the world. 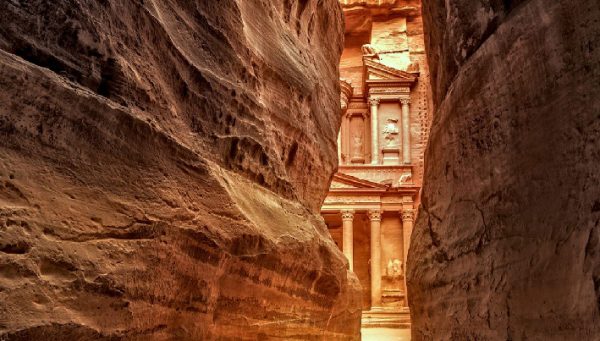 A horseshoe-shaped sea-pen holding captive bottle-nose dolphins in the Gulf of Eilat. Snorkel or scuba dive with the dolphins and other sea marine-life.

Dive with dolphins price per person:
339 NIS (approximately US $95)

We will enjoy relaxing dinner at our hotel.

Following breakfast, start the day with the following:

The largest natural aquariums in the world – built into coral reef. 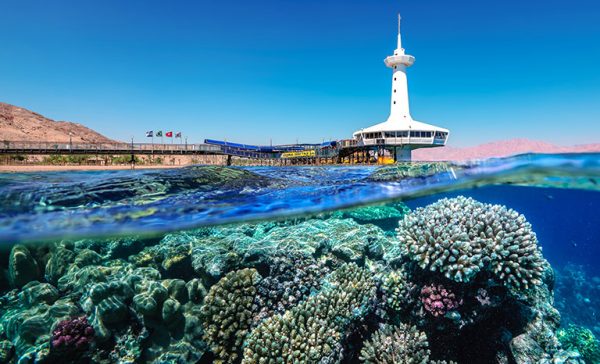 Located in the Negev Desert, the site is rich in copper ore and has been mined since the 5th millennium BCE. Visit the copper mines and view King Solomon’s pillars.

Drive north to our hotel in Tel Aviv for check-in. Enjoy a relaxing dinner at our hotel.

After breakfast (depending on flight times), we will be transferred to Ben Gurion Airport for departure. 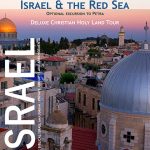 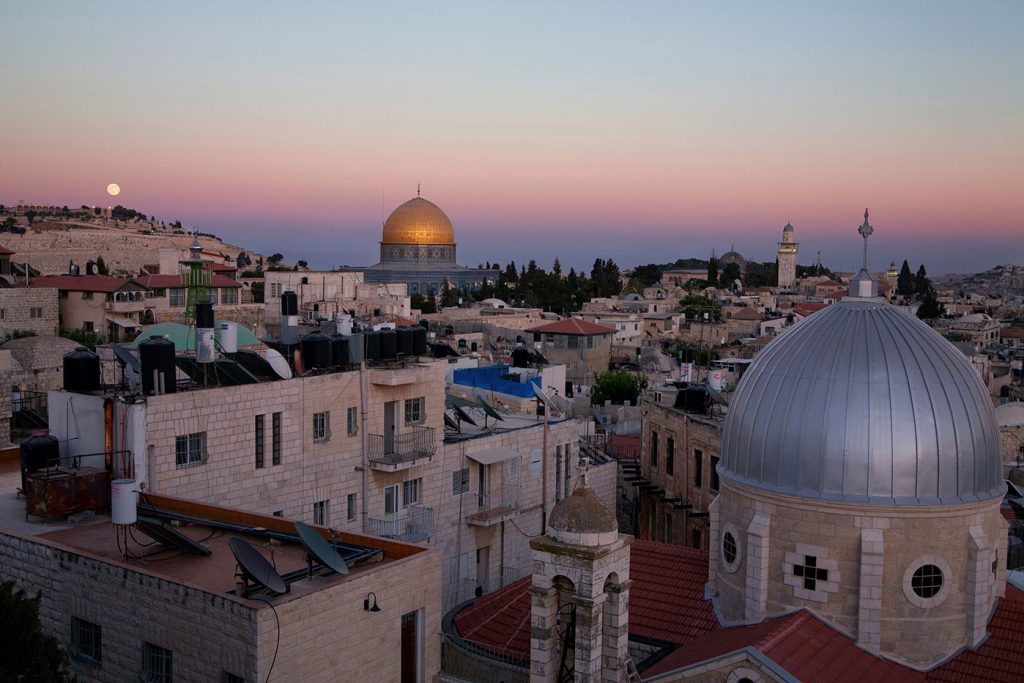 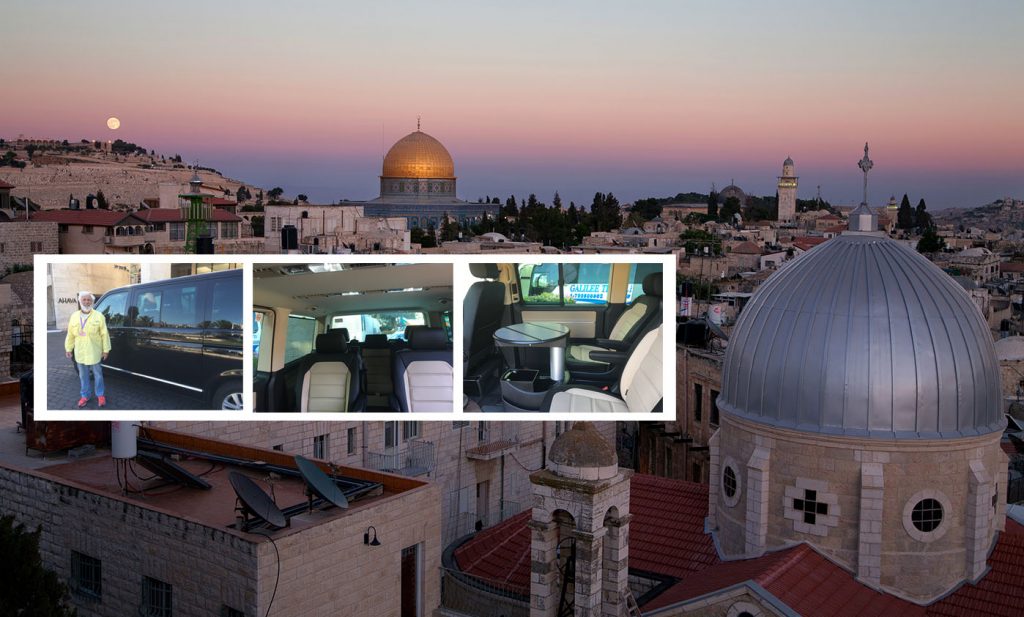